Over the past decade, there has been a slow and steady adoption of no code tooling which has led business leaders to rethink how they structure their teams. On November 9th, VentureBeat brought together 1,200 industry leaders and experts to listen in on the state of low code and no code technologies. As an authority in the technology landscape, VentureBeat put together this summit to share insights and best practices for those looking to adopt low or no code tooling.

The LC/NC (low code/no code) Summit lasted one day but was jam-packed with key findings and best practices for organizations of all sizes to adopt no code platforms. Here are our top five takeaways from the VentureBeat Low Code / No Code Summit.

1. Your Team Already Knows About No Code Tooling

The most prevalent theme from the LC/NC Summit was that low and no code tooling has already infiltrated most businesses. It may just be under the guise of website builders or workflow automation tools. All five of the sessions touched on the wide adoption of various no code application development tools. And according to Elijah ben Izzy, a Data Platform Engineer at StitchFix, that is because most of the modern workforce has an early introduction to no code tooling.

“I got an introduction to no code early with Lego Mindstorms. Then I moved to a little turtle that moved around the screen with simple programming requests,” said Elijah. He went on to elaborate by saying, “This simple programming early on introduced the ability for me to do things for myself.”

That mindset has been instilled in every employee that enters the workforce. Even those without a computer science background have been trained from an early age to figure it out for themselves, which lends itself to the adoption of no code platforms.

As Thunkable CEO Arun Saigal stated, “You don’t need to hire engineers to solve engineering problems anymore. Instead, you need to equip good people with the right tooling. They can figure it out. And, they want to figure it out.” 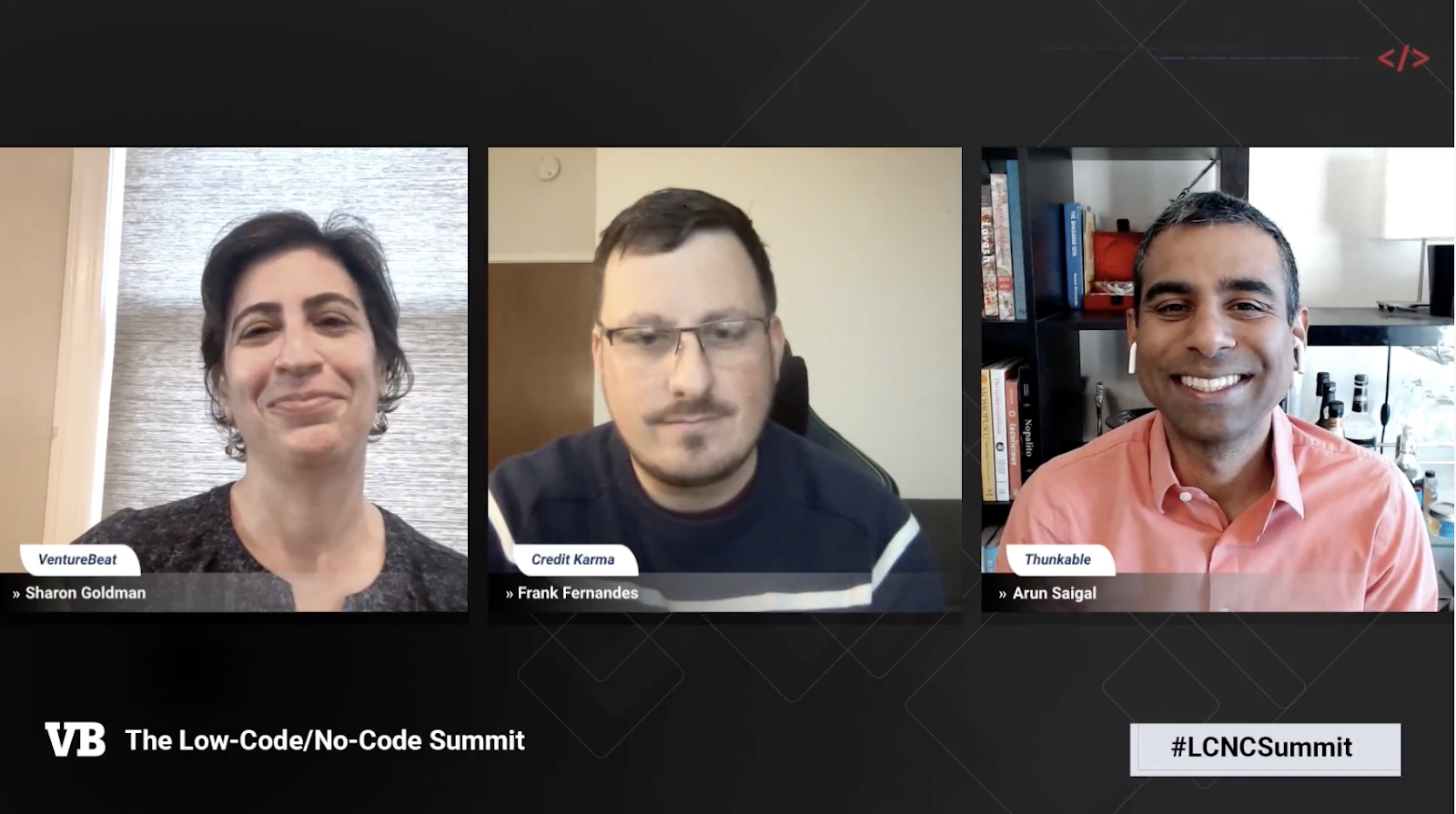 2. Enterprises Are Already Using No Code Tools — But Not In The Right Ways

Citizen development, digital transformation, and other lofty organizational goals are frequently thrown around by C-level executives as company mandates. But, what does that look like in practice?

As Chris Bedi, the Chief Digital Innovation Officer at SeviceNow put it, “The ultimate goal is to empower the talent to digitize their own work.” But business leaders look to implement tools, processes, programs, and so much more to solve a problem that already has a solution.

The solution Chris referenced is simple but difficult to unlock. The answer is to give power to the talent you have, with no code platforms, freedom to innovate, and empowerment to take action.

The reason this is difficult to unlock is neatly summed up by Dalibor Ninkovic from the Project Management Institute. As he puts it, “The adoption of low code/no code technologies is not in question nowadays. It is the usage of the technology [that is]. A vast majority of enterprises are using LC/NC, but it’s typically in the IT department, rather than [used for] citizen development.”

3. Security Is A Top Concern

Citizen development by using no code tooling is a key priority for business, but the internal approval and implementation process gets caught up in security reviews. Additionally, there are major concerns with access to sensitive information once citizen developers get their hands on the keys to the tooling.

As Ramesh Sundaresan, the VP of IT and Divisional CIO at Ryder Systems, put it, “Within people, process, and technology, the biggest challenge is the people. People are where the process and technology breaks.”

Even with the best InfoSec teams and policies in place, people will potentially wade into dangerous waters if the tooling allows them to. Even if accidentally.

IT teams should set up no code platforms to allow for experimentation and creativity, but have the ability to push to production when an idea comes to fruition. Not all work will be meaningful or stick, but when it does, that is when the magic happens.

This fundamental shift in mindset is needed for broad, organizational adoption of no code tooling. IT teams should pick the right platform that allows users to safely connect data, third party tools, and other systems without affecting production systems or sensitive information. As Marcus Torres, GM & VP of App Engine Business ServiceNow, said, “When you have the guardrails and the governance that doesn’t inhibit innovation, rather ensures innovation, that is where [low code/no code] tools thrive.”

4. Capacity and Constraints Can’t Be An Excuse Anymore

As Bedi said, “The biggest constraint on digital transformation is developer capacity. Low code/no code citizen development is the unlock to that constraint.”

According to the United State Bureau of Labor Statistics, there will be 22.2% growth in application development and quality assurance testing demand in the next 10 years. However, the amount of developers available and entering the workforce is nowhere near the ability to keep pace with this demand. The best organizations have identified this gap and were the first to turn to no code platforms.

During each session, it was frequently mentioned that developer capacity has hit its limit and there may never be enough traditional coding professionals. Many organization leaders may still be hesitant to introduce no code app building platforms to their teams because of the conflict that engineers may face by automating or reducing their workloads. But, this issue is merely surface level and actually the complete opposite of what reality is. “You’d think engineers would be apprehensive about using [low code/no code] tooling. But, they are not. Engineers like to work on things once and be done with it. And, these tools solve for that,” said Frank Fernandes, Director of Engineering at CreditKarma.

Skilled engineers and developers want to focus on the hard problems, not routine maintenance or simple problems. The best no code app development platforms eliminate the mundane work, while giving extensibility to engineers to build custom solutions or extensions.

When organizations realize that they can’t hire themselves out of their tech debt or roadmap backlog is when they’ll turn to no code platforms, just as the best organizations have already realized.

5. There Is So Much More To Come, But If You Wait, You’ll Be Too Late

As Saigal stated, “It is not a light switch. You can’t just say, ‘We are now citizen developers,’ and then force it upon your team. You have to breed a culture of innovation, and that starts with availability and familiarity. You need to make the tools available today to reap the rewards down the road.”

For organizations that have yet to recognize that this isn’t a trend, it may be too late. No code is going to be the way digital technologies are built moving forward. The pace of innovation continues to intensify.

For companies of any size to keep up, they must find ways to empower their entire organization to contribute to the mission. As Torres stated, “Development is a team sport. In the new age of digital transformation, in the new age of work,  that team sport is the partnership between a citizen developer and a traditional developer. And, when you get that, you create teamwork, you create context. And, that helps the business scale.”

Sundaresan neatly stated, “Technology is embedded in every facet of the business. And we must empower everyone to contribute.”

How To Get Started With No Code Adoption

If you’d like to get started with no code adoption and innovation, we’d recommend starting with Thunkable (obviously) as your no code app builder. Thunkable is used by 40% of Fortune 500 organizations to help design, develop, and deploy native, mobile-first experiences. Anyone — from HR to Product teams — can create no code mobile apps without any technical skill sets.

Start your no code journey today with our drag and drop app builder by signing up for free! 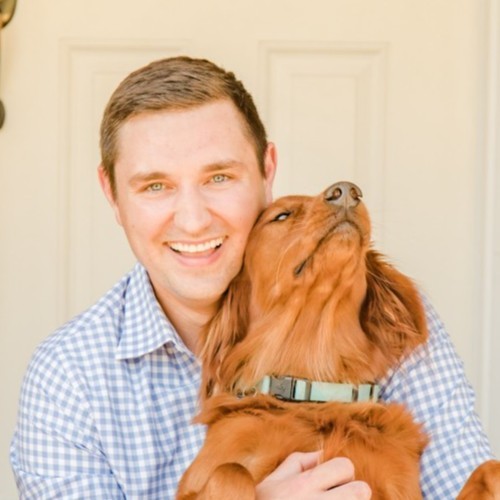 John McMullan brings all the marketing magic to life as the Head of Marketing at Thunkable. He specializes in product marketing, partnership management, and sales development. When he’s not managing the marketing department, he is managing the department of chickens, aka the chicken coop, in his backyard. McMullan enjoys all things sports (except soccer — yes, it’s soccer, not football) and preparing his garden for the next harvesting season. 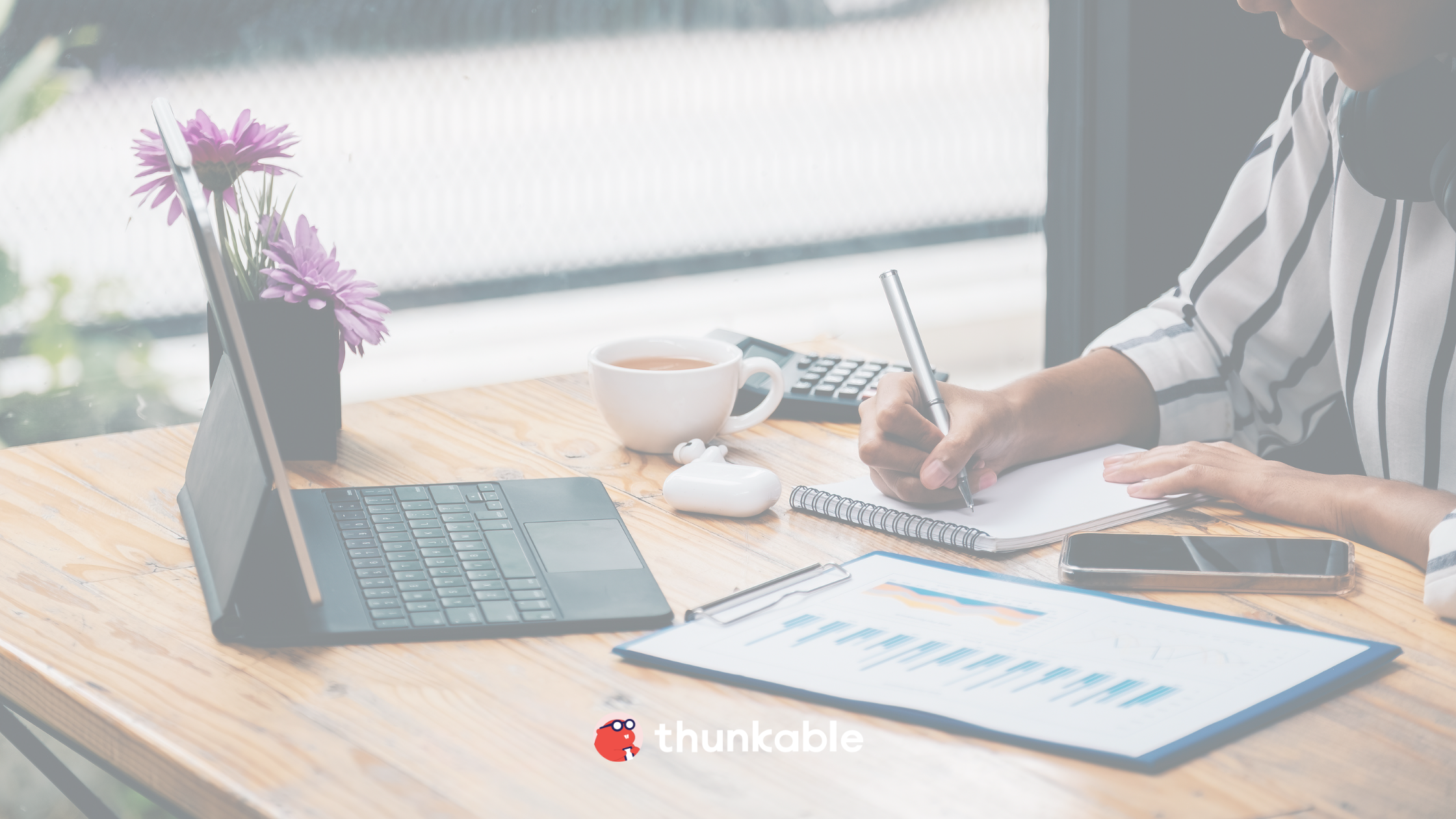 Tech For Good: Making the World a Better Place with No Code 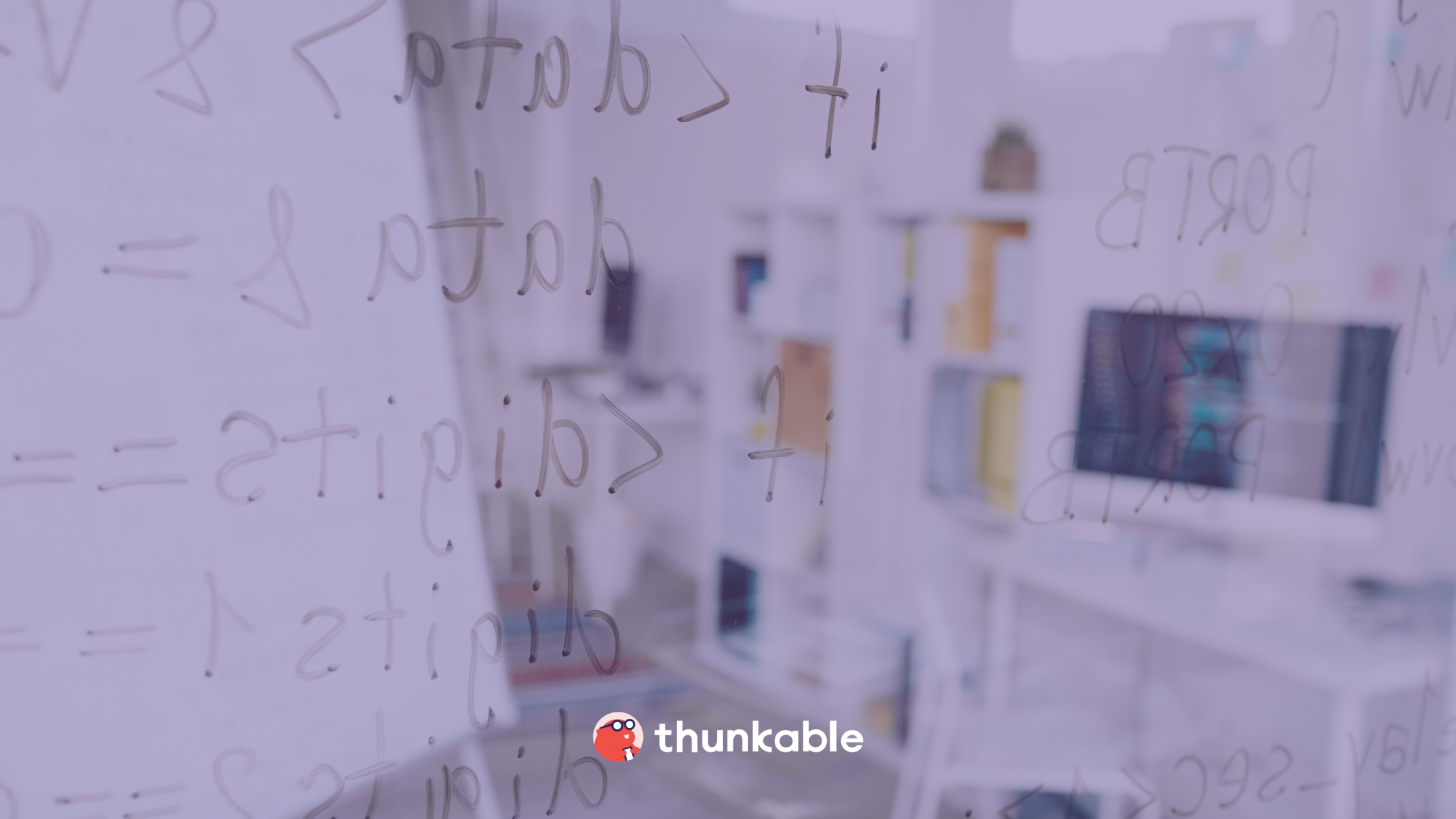 Why You Need a Backend Service for Your No Code App 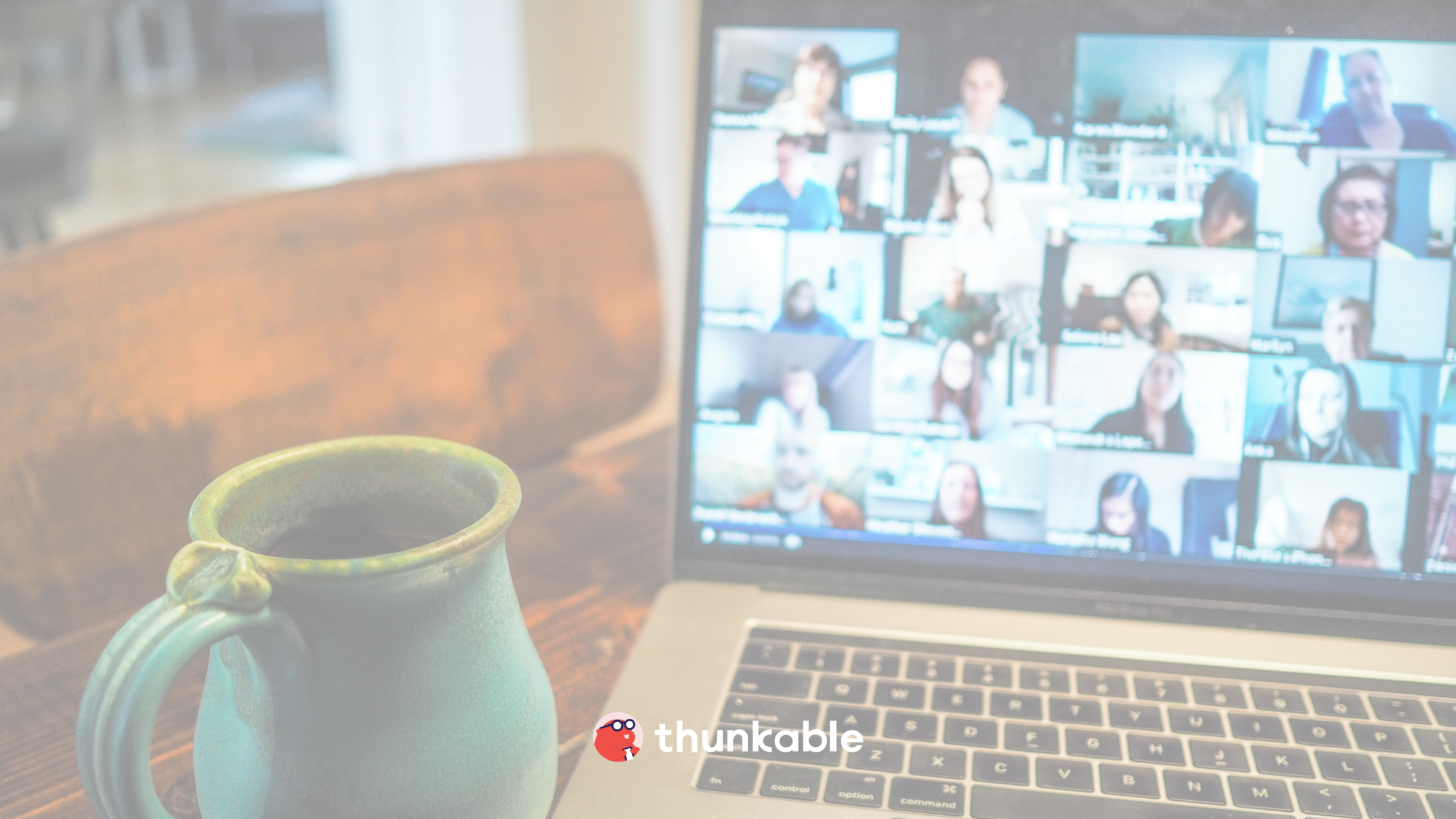