For anyone involved in building a product, you know the importance of going fast while minimizing risk. You need to move fast to get your ideas out to customers, to solve your users’ problems, and to beat the competition. But, you also need to carefully minimize the risk of building the wrong product or of spending too much time on ineffective features.

By testing your ideas frequently and vigorously with users, you can gather data on what works and what doesn’t, and then move forward with the most significant improvements.

Should You Use A/B Testing to Test Your Mobile App?

The most typical way to do test your mobile app is with A/B testing: release two variations (A and B) and see how they perform compared to each other. Especially with feature flag management as a service today, we’re seeing more and more adoption among enterprise companies undergoing agile transformations.

Sounds great and easy enough, right? It can be, but it's important to remember that the process isn't perfect. Here are a few limitations you might run into with A/B testing:

Utilizing Prototyping to Create Your App

This is where prototyping and user testing can be more helpful in your process. User research is the qualitative equivalent of A/B testing’s quantitative focus. Instead of showing a fully developed version to millions of users and collecting the data, show a prototype and learn through user research why certain approaches are (or are not) effective for certain users. And unlike traditional approaches to user research, you can now quickly and easily build a full-fledged app instead of having users click through static wireframes. Through a working prototype, you can:

Tips for Getting Started with Prototyping

In situations where a prototype would be most helpful, here are some tips to get you started:

It doesn’t matter if your product has mass adoption or is still in its infancy, you’ll need to constantly test and evolve. Gaining a firm understanding of your users’ workflows, desires, and goals is what separates elite app developers from the rest. The secret to cracking that code is through thoughtful and frequent user testing. Utilizing rapid prototyping can help improve iteration cycles, adoption rates, and key success metrics. So, use this guide when determining which type of methodology is right for you.

When the time is right, Thunkable is here to help you design, test, and iterate quickly.

Prepare for Takeoff: 5 Steps for Planning Your Mobile App Project

So you have an idea for a mobile app but don’t know how or where to get started? The good news is...

Apps with Benefits: Turning Your App Idea Into A Lucrative Side Hustle

So, you’ve got a great idea for your side hustle, and you want to build a no code mobile app to... 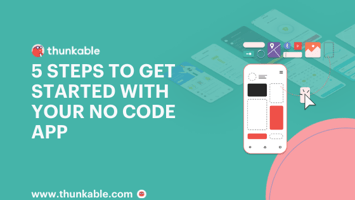 5 Steps To Get Started With Your No Code App

The magic of a no code mobile app development platform is that it takes very little expertise to...